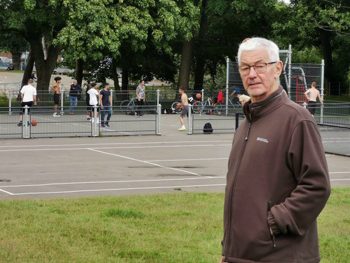 We have raised the problem of increasing knife crime, in Warley, with the Police.
This is the spot a knife was used to threaten players coming off the basketball court and a new bike stolen from them. Bob Smith, Chair of Sandwell LibDems, visited this well-used, family and community area that parents and local residents complain is becoming more dangerous. A week after this another lad was mugged by three men who took his bike in the same park. There is also the problem of used Nitrate Oxide capsules scattered all around, as we see all too often elsewhere in Sandwell.

Bob said, `this has been a wonderful area to grow up in, but we know there are bike & drug gangs plaguing parts of Sandwell, so unless the services can step up a gear, things will get worse. We're prepared to work with anybody to help things improve.`
Bob met with the police and youth services as well as concerned residents, to see what could be done to stop youngsters getting diverted into anti social activities, and containing those that do.

`In fairness the police are already extremely stretched as the years of austerity have whittled away at police resources and government election promises for extra staff have yet to be realised,` he observed, adding that, `unfortunately I haven't experienced the local MP, John Spellar, as being the most active of MPs. However the Smethwick police team have been putting on some initiatives to help develop connections with the community, so we will be watching how this unfolds.`
Bob pointed out that at the last election, LibDems promised to invest £1 billion to restore community policing, that is enough for two new police officers in every ward. Lightwoods Park would certainly benefit from more police presence as would the whole of Sandwell. The West Midlands knife crime rate is currently the second highest in the country. Knife crime actually reduced across the UK during the Coalition gov't with the LibDems, but has increased every year since 2015 while the Tories have been in power!