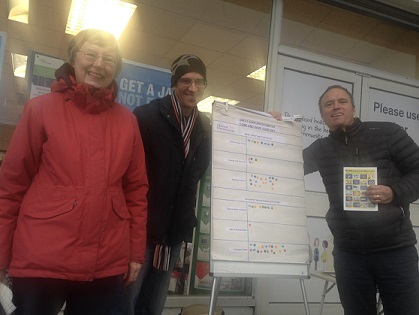 Local campaigners, Rob Johns, Nigel Fearn, Mark Smith, and our People's Vote colleague from EU in Walsall, Judith, asked local shoppers for their views at the Scott Arms, and would like to thank everyone who took the time to share their opinion with us.

Afterwards the team reported back to former Liberal Democrat Mayor of Sandwell, Sadie Smith. Only 24% of people think the Prime Minister's deal is best for the UK, and 68% think that there should be a People's Vote, giving them the final say on whether to accept the deal or not.

Former Mayor, Sadie, thanked the group for giving up their time and doing a really good job, adding. "The result was encouraging and likely to be a fair reflection on views in this part of Sandwell."

Other Sandwell LibDem members were supporting EU in Brum campaigning in the city centre on this People's Vote Day of Action.