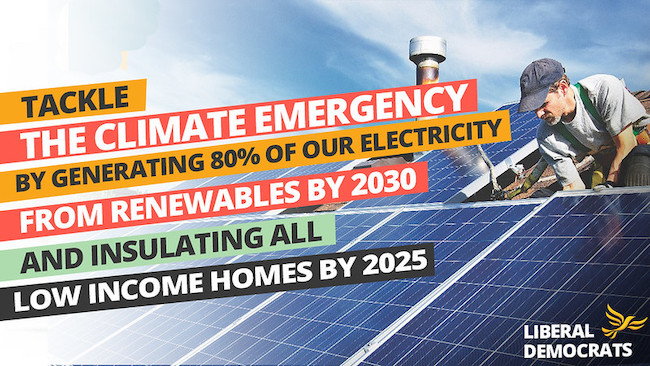 The independent Committee on Climate Change has recommended 2050 as the date the UK should be net-zero in all greenhouse gases. This is not ambitious enough, it should be much earlier. We should strive to achieve Net Zero much earlier, such as 2025 as Extinction Rebellion would like, or 2030 as others have suggested, and by 2045 at the very latest. 2045 would be radical, but also realistic date for the UK to achieve net-zero. As this is a Climate Emergency , Sandwell must do better than it has done to reduce emissions.

Sandwell Council has discussed measures to reduce net greenhouse gas emissions, such as  Zero Energy Homes, proper use of household wastewater (known as grey water) from a sink or bath, and tree planting. However, good intentions have not resulted in real action to reach a net-zero target. As is often the case with Sandwell Council, elected members are too reliant on advice from officers to steer Council policy in an environmentally-friendly direction. All too often, the wishes of developers have been given undue importance, and the Labour run Council has been too timid to insist on better environmental protections.

Although a handful of Zero Heat Homes have been built in Oldbury, there are far too few to help combat global warming, and not evenly spread across the borough. We need to see action being taken in both Warley and West Bromwich. Advances in green technology mean it is now much easier to build homes and non-residential buildings to a zero-carbon standard. Liberal Democrats would require all new houses and buildings be built to this zero-carbon standard, through use of renewable energy sources by 2021, and to a more ambitious standard by 2025. We urge Sandwell Council to commit to this and ensure that it meets its obligations to the next generation of our residents.