People's Vote Rally a Sell Out! 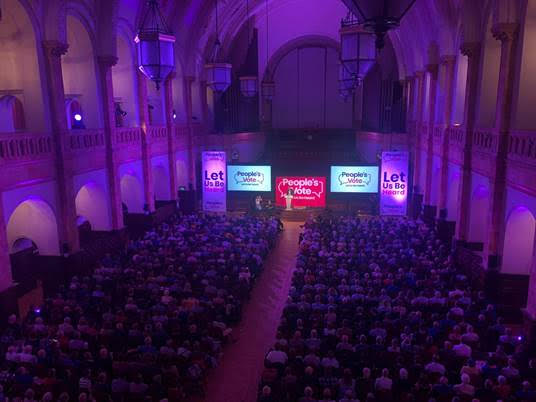 A good number of Sandwell LibDems members attended the sell-out People’s Vote rally in Birmingham on 30 July. Over 1000 people packed the imposing Great Hall to hear speeches from a wide range of cross-party speakers.

Hosted by sports commentator Clive Tyldesley, speakers included comedian Mitch Benn, outspoken Labour MP Jess Philips, Green MEP Ellie Chowns – along with a video from ex Speaker of the House Betty Boothroyd. Other contributions were made by people representing sectors such as health and youth – all hugely affected by the risks posed by Brexit. A highlight of the evening was Moseley based LibDem campaigner Izzy Knowles who told her personal story of why she’d become so involved in the campaign to stop Brexit.

Newly re-elected LibDem MEP Phil Bennion spoke passionately about how our MEPs are working tirelessly behind the scenes with their European counterparts to ensure that a last minute reprieve from leaving the EU is an option, especially in the case of a general election or a People’s Vote, saying that both Chief Negotiator Michel Barnier and President-Elect Ursula von der Leyen are both sending very positive and supportive messages.

The event ended with an impassioned speech by Lord Hesseltine who explained why, after 70 years of supporting the Conservative party, he switched to LibDems in the recent European elections as he was so worried about the future of our country.