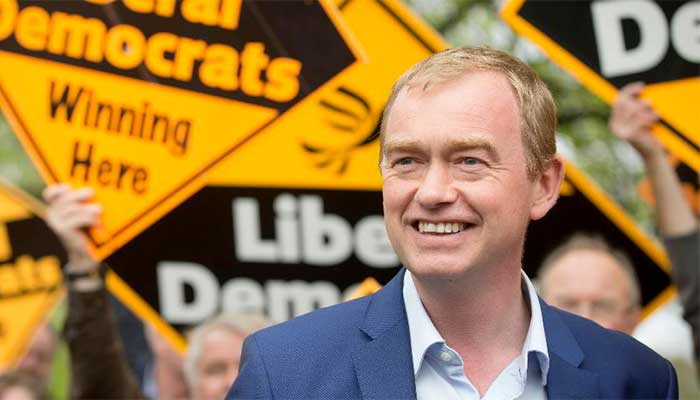 This afternoon Tim Farron resigned as Liberal Democrat leader. At party HQ in London he gave the following speech to party staff:

This last two years have seen the Liberal Democrats recover since the devastation of the 2015 election.

That recovery was never inevitable but we have seen the doubling of our party membership, growth in council elections, our first parliamentary by-election win for more than a decade, and most recently our growth at the 2017 general election.

Most importantly the Liberal Democrats have established ourselves with a significant and distinctive role - passionate about Europe, free trade, strong well-funded public services underpinned by a growing market economy.

No one else occupies that space.  Against all the odds, the Liberal Democrats matter again.

We can be proud of the progress we have made together, although there is much more we need to do.

From the very first day of my leadership, I have faced questions about my Christian faith.  I've tried to answer with grace and patience.  Sometimes my answers could have been wiser.

At the start of this election, I found myself under scrutiny again - asked about matters to do with my faith.  I felt guilty that this focus was distracting attention from our campaign, obscuring our message.

Journalists have every right to ask what they see fit.  The consequences of the focus on my faith is that I have found myself torn between living as a faithful Christian and serving as a political leader.

A better, wiser person than me may have been able to deal with this more successfully, to have remained faithful to Christ while leading a political party in the current environment.

To be a political leader - especially of a progressive, liberal party in 2017 - and to live as a committed Christian, to hold faithfully to the Bible's teaching, has felt impossible for me.

I'm a liberal to my finger tips, and that liberalism means that I am passionate about defending the rights and liberties of people who believe different things to me.

There are Christians in politics who take the view that they should impose the tenets of faith on society, but I have not taken that approach because I disagree with it - it's not liberal and it is counterproductive when it comes to advancing the gospel.

Even so, I seem to be the subject of suspicion because of what I believe and who my faith is in.

In which case we are kidding ourselves if we think we yet live in a tolerant, liberal society.

That's why I have chosen to step down as leader of the Liberal Democrats.

I intend to serve until the parliamentary recess begins next month, at which point there will be a leadership election according to the party’s rules.

This is a historic time in British politics. What happens in the next months and years will shape our country for generations.

My successor will inherit a party that is needed now more than ever before. Our future as an open, tolerant and united country is at stake.

The cause of British liberalism has never been needed more. People who will fight for a Britain that is confident, generous and compassionate are needed more than ever before.

That is the challenge our party and my successor faces and the opportunity I am certain that they will rise to.

I want to say one more thing: I joined our party when I was 16, it is in my blood, I love our history, our people, I thoroughly love my party.

Imagine how proud I am to lead this party.  And then imagine what would lead me to voluntarily relinquish that honour.

In the words of Isaac Watts it would have to be something 'so amazing, so divine, (it) demands my heart, my life, my all'.