Back to school for Sandwell LibDems 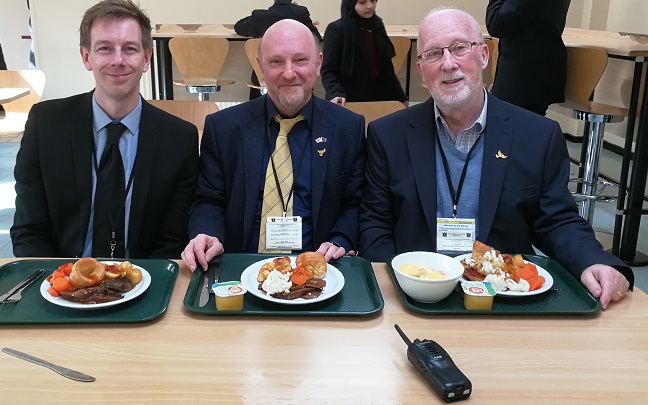 As part of Democracy Day on Wednesday 13 February, the Chair and Secretary of Sandwell LibDems, Bryan and Kevin Manley-Green, were invited to Stuart Bathurst Roman Catholic School in Wednesbury to speak to groups of pupils.

The day started with a briefing from Head of Year 7, Michael Connolly after which Bryan and Kevin were introduced to the first of three groups of about ten students. After a rather delicious school dinner they met two more groups, with ages ranging from 11 to 16 years old.

Although questions had been prepared in advance by the students, the sessions took the form of free-flowing conversations, with the students being encouraged to ask questions and give their opinions. Brexit was raised frequently, with questions such as; what is it, what is happening, how will it affect them, their schools, families, communities and the economy? Other topics were covered, such as what do the LibDems offer, what would we do about poverty, climate change, job loss through automation, fracking, etc.

The discussions also included how they felt about the trip to Parliament some of the pupils had been lucky enough to attend the day before. During their visit, they saw a rather nasty spat between the leader of the SNP and the Prime Minister. This led to talking about how our democracy works, focusing on our unelected House of Lords.

“It’s a huge shame that the pupils seemed as perplexed as us about Brexit”, said Bryan, after hearing comments such as “Brexit doesn’t make sense” and “I try to watch the news, but simply can’t understand what’s going on”. Surprisingly, not everyone was onboard with a key LibDem policy of extending voting to 16 and 17 year olds, with one pupil saying that most people that age would only vote the same as their parents.

Kevin commented “It was a thoroughly enjoyable, if exhausting day and our respect for teachers is now even higher than it was previously!”